Stars and Stripes - Learn the history of the American flag

"Old Glory, Stars and Stripes, the Star-Spangled Banner" - Since its inception, the American flag has been an important part of the nation's history. Surviving for over 200 years, the flag has grown and developed both physically and symbolically in times of success and crisis.

The American flag, which has survived countless battles, has inspired heroes and artists and has evolved over time in response to the growth of the country it represents. Used to show nationalism, the flag is so important that its story tells the story of America itself. For the American people, it represents freedom, dignity and the true meaning of being an American.

The following is a collection of interesting facts and customs about the American flag and how it should be displayed.

The History of the American Flag : The birth

The origins of the American flag, known worldwide as "Old Glory" or "Stars and Stripes" are unknown. Its history is full of mystery and charm just like the history of the republic it embodies.

On June 14, 1777, the Continental Congress approved the first design of the American flag with 13 stripes representing the original 13 colonies of the United States, with an act establishing this flag as official and representing the birth of the new nation after fighting and gained independence from England. The resolution stated:

“It is established that the flag of the United States is of thirteen stripes, alternating between red and white; that the union is represented by thirteen stars, white in a blue field, which represent a new constellation ".

As the United States expanded rapidly after the colonial period and with the addition of new states, the flag had to evolve along with the changing composition of the country. 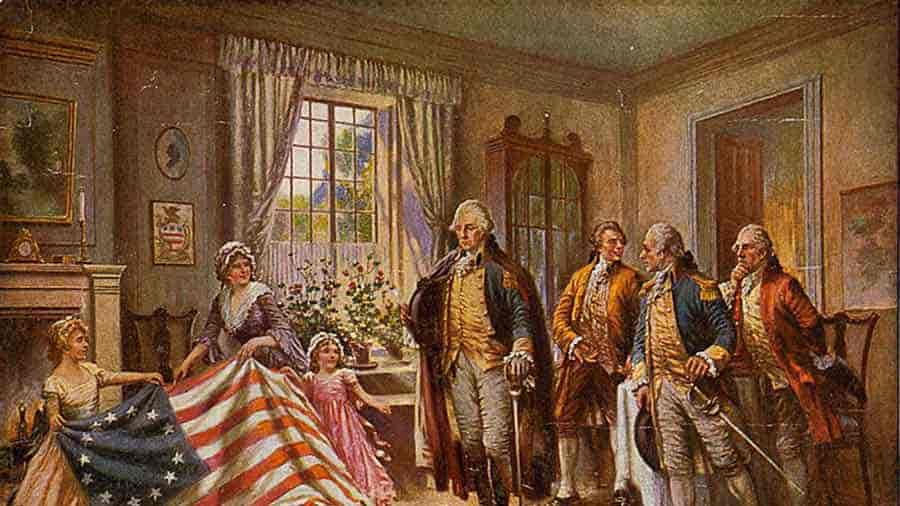 Between 1777 and 1960, Congress passed multiple acts that changed the flag design to reflect new realities as new states were admitted. It was too messy to add new stripes for each state, so it was decided that the number of stripes would remain the same: 13 for the 13 founding colonies. The new states would be reflected in the number of stars of the box in the upper left corner of the American flag.

In honor of this act, on August 3, 1949, President Harry S. Truman officially declared June 14 as Flag Day. Legend has it that the first official American flag was designed by a Philadelphia seamstress, Betsy Ross, who modified the previous version adopted in late 1775 which featured the British Union Jack along with 13 stripes for the 13 colonies. The seamstress, Betsy Ross, replaced the Union Jack with a 13-star circle designed to represent each of the original colonies. This version was officially adopted on June 14, 1777.

For further information on the history of the American flag, and precisely why it is called Old Glory, you can visit the Smithsonian Magazine website.

The definitive version of the American flag was adopted in 1959 by President Dwight D. Eisenhower, when Alaska was annexed in the same year.

How many Stripes on American Flag : 13 stripes for 13 states Now let's see what the 13 states are represented by the stripes of the United States flag:

New Hampshire is a colony founded in 1638 by John Wheelwright that became a State of the Union on June 21, 1788. It was the first state to vote for the declaration of independence on July 4, 1776. It is one of the states of New England and is characterized by vast natural landscapes and picturesque villages. The main cities of New Hampshire are: Concord, Manchester, Nashua, Derry, Rochester, Salem, Dover, Merrimack, Londonderry, Hudson. The New Hampshire motto is live free or die.

It is a colony created in Providence in 1636 on land purchased by the Narragansetts tribe, a young pastor Roger Williams and the Brown brothers, all dissidents. Roger Williams, one of the first to challenge British local authorities under John Winthrop's command, was driven out of Massachusetts Bay by the Puritans. Rhode Island became a State of the Union on May 29, 1790. It is the smallest state in the United States, but also one of the most populous. The main cities are: Providence, Warwick, Cranston, Pawtucket, Woonsocket, Coventry, Cumberland, Portsmouth, Newport.

Connecticut is a colony founded in 1636 by Thomas Hooker in Hartford, its capital. It is a US state in southern New England, with a combination of coastal towns and rural areas dotted with small towns. Connecticut became a state of the Union on January 9, 1788. The main cities of Connecticut are Hartford, New-Haven, Bridgeport, Stamford, Waterbury, Norwalk, Danbury, New Britain, Greenwich. The city of New Haven owes its fame to Yale University and its illustrious Peabody Museum of Natural History.

It is a colony that was created in 1638. Delaware is a coastal state of the USA, bordered to the west and south by the state of Maryland, to the north by the state of Pennsylvania and 3 hours from the state of New Jersey and the Atlantic Ocean. Delaware became a State of the Union on December 7, 1787, the first to ratify the Constitution. The main cities of this state are: Dover, Wilmington, Newark, Milford, Seaford, Middletown, Elsmere, Smyrna, New Castle, Georgetown. Its capital is Dover.

It is a colony created by Cecil Calvert Lord Baltimore and his family in 1632. Maryland became a state of the Union on April 28, 1788. Characterized by its multiple rivers and coastlines that line the Chesapeake Bay and the Atlantic Ocean. The major cities of Maryland are Annapolis, Baltimore, Frederick, Gaithersburg, Bowie, Rockville, Hagerstown. Its largest city, Baltimore, has long been an important seaport.

It is a colony founded by John Smith in Jamestown in 1607. Being one of 13 colonies, the state has historic buildings including Monticello, the iconic plantation of founding father Thomas Jefferson, in Charlottesville. Jamestown Settlement and Colonial Williamsburg are museums that bring history to life with reconstructions from the colonial era and the American Revolution. The main cities are Richmond, Virginia Beach, Norfolk, Williamsburg, Chesapeake, Newport News, Hampton, Alexandria, Portsmouth, Roanoke, Lynchburg.

It is a colony created by the settlers of Virginia in 1653. North Carolina is a state in the southeastern United States that offers a varied landscape, ranging from the beaches of the Atlantic Ocean to the Appalachian mountain range. It became a US state on November 21, 1789. Its main cities are Raleigh, Charlotte, Greensboro, Durham, Greensboro, Winston-Salem, Fayetteville, Cary, High Point, Wilmington, Asheville. The largest city in the state is Charlotte. The latter is the home of the Carolina Panthers NFL team and includes museums such as the NASCAR Hall of Fame.

Georgia is a colony founded in 1733 by James Oglethorpe. Georgia became a state of the Union of the United States on January 2, 1788. Major cities in Georgia are Atlanta, Augusta-Richmond County, Savannah, Columbus, Athens-Clarke Country, Macon, Roswell, Albany.

It is a colony founded by Peter Minnuit on the island of Manhattan in 1626. New York became a State of the Union on July 26, 1788. Its main cities are Albany, New York, Buffalo, Rochester, Yonkers, Syracuse, New Rochelle, Mount Vernon, Schenectady, Utica. The multiple attractions include skyscrapers such as the Empire State Building and the impressive Central Park.

Like South Carolina, it is a colony created by English colonists in 1664. New Jersey became a state of the Union on December 18, 1787. It is a state in the northeastern United States and boasts approximately 130 miles of Atlantic coastline. The main cities are Trenton, Princeton, Newark, Jersey City, Paterson, Elizabeth, Edison, Woodbridge, Dover, Hamilton, Trenton, Camden. The Jersey Shore is home to major seaside towns such as the historic town of Asbury Park and Cape May, which is decorated with perfectly preserved Victorian buildings.

It is a colony founded in 1682. Pennsylvania, a state in the northeastern United States, is one of 13 colonies that gave birth to the United States. It became a State of the Union on 12 December 1787. The main cities are Harrisburg, Philadelphia (30,000 inhabitants in the 18th century), Pittsburgh, Allentown, Erie, Upper Darby, Reading, Scranton, Bethlehem. Philadelphia is the largest city in the state of Pennsylvania.

How many Stars on American Flag : 50 Stars for 50 States

The American flag has undergone many changes over the centuries since its adoption. There are 27 versions that have followed over time. As mentioned earlier, the first version of the flag represented the United States from 1777-1795 and was born a year after the declaration of independence. As we originally read, the base of the flag had only 13 stars aligned in a circular shape and 13 horizontal bands of red and white representing the 13 British colonies that had become independent. 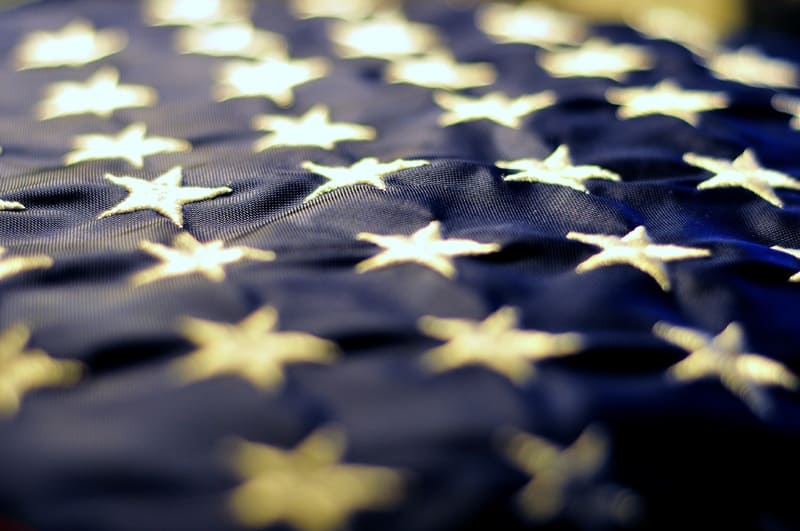 The second version of the American flag was adopted in May 1795, the year in which the number of stars and stripes was raised to 15 after the integration into the union of the states of Vermont on March 4, 1791 and Kentucky on June 1, 1792. This new 15 stars and 15 stripes version is known as “The Star-Spangled Banner”.

After a British bombing during the war, amateur poet Francis Scott Key was so inspired by the sight of the American flag still flying over Baltimore's Fort McHenry that he wrote "The Star-Spangled Banner" on September 14, 1814. It officially became, in 1931, the national anthem of the United States.

After the Anglo-American War of 1812 other states were added to the union and in particular: Tennessee (June 1796), Ohio (March 1803), Louisiana (1812), Indiana (1816) and Mississippi (1817). Unable to modify the striped structure (the flag would become confusing), in 1818 the American Congress approved the third of the three main acts in reference to the flag stating that the pattern of the same had to return to the original configuration of 13 alternating stripes of red on white, representing the 13 founding colonies, and that a star would be added for each new associated state.

This will be the definitive version that we still know today in which the 50 white colored stars arranged in 9 rows horizontal and resting on a blue background. Meaning of the colors of the American flag.

The colors of the American flag

Regarding the meaning of colors and symbols, President George Washington stated:

"we take the stars from the sky, the red of our country of origin (England), but with the white stripes dividing them, thus showing the world independence, and these same white stripes will pass to posterity as a symbol of freedom".

The white band therefore means purity and innocence, the red refers to courage and valor, and the blue means hope, loyalty, perseverance, justice and truth.

For American citizens, there is a strict protocol to be observed to best honor the flag.

There are a few places where the US flag is waved 24 hours a day, by presidential proclamation or by law:

To this day, not only for American citizens but for the majority of the world's population the American flag remains a vibrant symbol of the principles of democracy, justice and freedom.

If you are a fan of American culture or simply want to visit the historical places that contributed to the creation of the US state, remember that in order to enter US territory, you will need to be in possession of an ordinary US tourist visa. Citizens of the countries adhering to the Visa Waiver Program, they can submit a request to obtain the ESTA USA permit. The e-Visa is for short stays. The limit is 90 consecutive days of stay in the USA. For information on how to submit the form, you can consult the ESTA guide.

Other Articles that may Interest You

Request an ESTA with a criminal record

ESTA and the 90-day limit for visits to the United States Published ESTA.click — Feb 17, 2021  The ESTA (Electronic System for Travel Authorization) was conceived as part of the Visa Waiver Program, a program introduced by the American government...

The History of the American Flag

ESTA-CLICK is not an affiliate and does not depend directly on the United States government or its embassies. It is a service agency that offers assistance with travel practices. The services offered by our site have a fixed rate of € 39 which includes government taxes and expenses related to the practice.